I have taken grief from some readers at times for my position on the issue of Climate Change. I have always maintained that I am not an expert, and therefore I accept the scientific consensus on climate change. This is no different than my standard in many other fields in which I am not an expert. If I get a diagnosis from my doctor, I may get a 2nd opinion, but generally I must defer to the experts on the matter. They might be wrong, of course, but I simply don’t have the sort of training they do to get into the fine details of the diagnosis. I am a believer in peer review and the scientific method. Despite occasional missteps, those have served us well.

Hence, my position has always been that I accept the scientific consensus on climate change, but also understand that science isn’t static. Therefore, it is important not to shut debate down and short-circuit the scientific process. But many climate change advocates have long sought to do just that by trying to intimidate people into not discussing the issue. They like to say “the science is settled and those who disagree are deniers.” I view the labeling of people as “deniers” as such an intimidation tactic. It is a remark intended to disparage those with a different view, and as such I don’t believe it has a place in this debate (no matter how correct you think you are).

However, even though I have always accepted the scientific consensus on this issue, I think there is little that we are going to be able to voluntarily do to stop the accumulation of carbon dioxide in the atmosphere. The reason for that is that this is a global issue, and many countries are going to gravitate toward the cheapest source of energy – usually fossil fuels. Thus, my position on CO2 emissions has always been that they will likely continue to increase as long as we have fossil fuels to burn. (I have explained my views on this in detail here and here). Here is an illustration that backs me up: 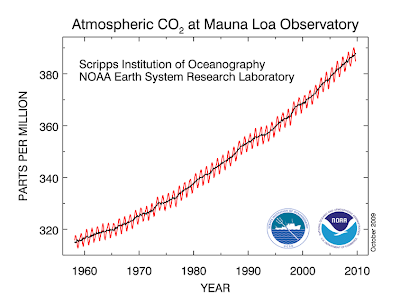 Despite our best efforts, CO2 continues to rise, and again I believe it is because it is practically impossible to get a global agreement with enforcement teeth. It will be tough to convince a developing country with coal reserves not to exploit those reserves. Many developing (and developed) countries have refused to limit their emissions, and so despite Kyoto and other agreements the CO2 concentration rise has been unabated.

So that’s my view in a nutshell. That doesn’t imply that I don’t think there is a problem. It only suggests that I can’t see us fixing it voluntarily. So recently when I was asked about CO2 emissions at the 2010 Global Footprint Conference, I summed up my views as I have done so here.

I was quoted in a news release:

There is no cheap-oil future for us, and if humanity doesn’t make the transition to a sustainable energy source, Mother Nature will. Robert Rapier, Chief Technology Officer of Merica International, issued this dire warning during a presentation at an international forum in Colle di Val d’Elsa, Italy, on Monday. Rapier is among the experts at Footprint Forum 2010, an international gathering of 200 scientists, economists, and business and government leaders to discuss today’s most urgent environmental challenges and strategies to address them.

According to Rapier, peak oil — when oil production rates begin an irreversible decline — will have a direct effect on global warming. “When there’s a decline in oil production, the first thing we do is turn to coal plants and tar sands,” he said. “We will demand that because we have built a society on cheap oil. But eventually fossil fuels will run out. That would solve our CO2 issue — it would solve a lot of problems. But I don’t like how Mother Nature solves these problems.”

I generally choose my words carefully, because they are so often taken out of context. Note what I did and did not say. I was asked specifically about CO2 emissions. I chose to focus on that instead of simply talking about global warming or climate change, because even those who don’t agree about man’s impact on climate change have to acknowledge that CO2 concentrations in the atmosphere are rising. Likewise, I did not say a word about temperature, nor did I imply that climate change would be instantly solved when we run out of fossil fuels. My comment was specific to CO2 – emphasizing the fact that I think the concentration will continue to rise while we have fossil fuels to burn.

So how did some fanatics respond to this?

Excerpts from Person A:

R^2,you have officially jumped the shark on CO2, IMO. Yours is also (Kjell) Aleklett’s position which why he’s listed as a CC denier. The idea is that CO2 causes warming, no more CO2 means no more warming, which is incorrect.

By jumped the shark I mean you’ve officially entered the realm of the CC deniers.

There are several camps of deniers. Some say we will run out of fossil fuel very soon and it will start to cool off–in other words a temporary phenomenon. I place you in the third camp.

Lest you think that is a random fanatic, someone else chimed in:

Excerpts from Person B:

Frankly, I put you in the same camp as Aleklett, too.

Really, it’s quite a ridiculous argument, totally devoid of logic. I see no difference here, Robert. CO2 will level off after we stop burning CO2? Tell that to the clathrates and the tundra, because they are saying you’re full of methane.

I simply don’t know what to say to people like this. Note that in this case, they have labeled me a “denier” because they extrapolated my position into something it is not. They chose to put words in my mouth. One falsely claimed that I was suggesting that it would soon start to cool off as CO2 stopped rising. The other falsely claimed that I suggested all greenhouse gases would immediately stop climbing. Note that I neither said nor implied any of the things they attributed to me.

What can you say about someone who would slap a derogatory label on anyone they feel isn’t in compliance with their views on climate change? It invokes images of a “Climate Change Thought Police.”

I do not want to see this issue turned into a religion, where belief trumps all and disbelievers must be harshly dealt with. That’s what these two have done, and they are certainly not isolated in their opinions. But when you go so far as to start slapping derogatory labels on those who don’t even dispute that there is a problem, then you deserve your own labels. You are nothing more than Joe McCarthy looking for phantom Communists everywhere.