I am traveling later this week, and will be on the road for nine days (Colorado, New York, Massachusetts). I was trying to wrap up the loose ends from my previous post with a much more comprehensive look at the ethanol/import issue before I travel. However, there are a couple of questions I had for the EIA before I finish up. As soon as I hear back from them, I will post a number of graphs and I will put my spreadsheet up so everyone can pick through it. But if I don’t hear back within a couple of days, it may be a while before I can put up the final installment.

But so far, it still looks like my initial observation was correct: Ethanol has not reduced our oil imports. Our oil imports have fallen over the past couple of years, but here is why: 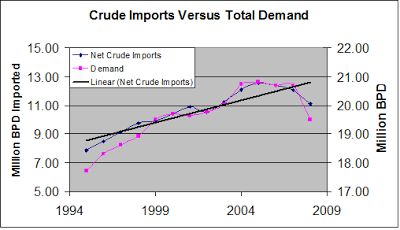 I will clean that graph up in the final posting. It should be obvious, but the import scale is on the left. Bear in mind that the ethanol production numbers do show up in the demand numbers. Thus, whether petroleum demand was impacted by ethanol displacement is irrelevant in that demand number, since whatever is no longer counted as petroleum is counted as ethanol.

If you notice, “Imports” track “Demand” very closely, except demand fell faster in 2008 than did imports. If ethanol was actually impacting imports, what I would expect to see is the import line negatively trending away from the demand line. For instance, since ethanol began to really ramp up in 2002, we are producing an incremental 7 billion gallons per year with an energy content of over 250,000 bbl/day of finished petroleum products. The change in demand through 2002 was down slightly. Yet imports actually rose slightly. If ethanol was impacting imports this is where I would expect to see it; with imports falling faster than demand fell (or rising more slowly than demand rises as ethanol makes a contribution).

One reader asked a great question – just the kind of question I like to get following these essays. The blending of the oxygenate methyl tertiary butyl ether (MTBE) was phased out in 2006. In order to meet the oxygenate requirements for specific areas of the country, ethanol replaced MTBE in the gasoline blending pool. So is it possible that the reason petroleum imports didn’t fall as ethanol ramped up was that ethanol was being used to replace MTBE? If MTBE was being made with domestic products that are not captured in the liquid demand summary, then it would be theoretically possible for ethanol to replace MTBE with no impact on imports. That sent me on a mission into the EIA archives digging through historical MTBE data.

The MTBE picture is complicated, and thus I expect there to be many opinions on how to handle it. Until 2008, the EIA published a monthly supply/demand picture on MTBE. The report is called Monthly Oxygenate Report, and the historical data are still all there. Figure 29 of this USGS report confirms that MTBE production had plateaued in the years 1999-2002 at just over 3 billion gallons per year. During 2002, production dropped sharply as it started to be phased out. If you look at this year end 2003 report, they show historical production separated into merchant plants and captive plants. (See Table D-4). The EIA defines a merchant plant as one that isomerizes normal butane to isobutane, dehydrogenates isobutane to isobutylene, and then reacts the isobutylene with methanol to produce MTBE. The definition of a captive plant is one that takes isobutylene, produced as a byproduct of refinery operations, and reacts it with methanol to produce MTBE.

The previous definitions are important for understanding how the MTBE phase-out should have impacted the import picture. Because butane is captured both in the import numbers and in the petroleum demand numbers, any ethanol that displaced MTBE should have backed out butane imports – thus lowering total imports. But, MTBE is partially produced from methanol, which is generally produced from domestic natural gas. Natural gas is not captured in the petroleum imports number, nor is it captured in the demand number. Thus, ethanol that backed out MTBE would not have impacted the natural gas piece that went into MTBE. So what we have then is that some of the ethanol ramp-up would have been diverted into MTBE replacement without being expected to have impacted demand.

How much? The portion that came from the natural gas. The MTBE reaction as stated above requires isobutylene and methanol. One molecule of MTBE has one molecule of embedded methane (via methanol). Let’s make the best case assumption that all MTBE production was replaced by ethanol. In 2002, ethanol production was really ramping up and MTBE was falling off the plateau. So let’s take the last year of strong production, 2001, and assume that must be replaced by ethanol. In 2001, MTBE production averaged 212,000 bbl/day for the year (per the previous historical report). The EIA did a comprehensive study of the MTBE replacement issue in 2006, and they concluded that from the oxygenate perspective, it takes 9 barrels of ethanol to replace 10 barrels of MTBE.

There are two other factors that complicate matters even more. Since ethanol has a lower energy content, when ethanol displaces MTBE other components need to be added to compensate for the loss of energy. That may result in addition imports to keep the BTU content of the gasoline pool constant. Further, because the vapor pressure of ethanol is higher, certain components like butane and pentane must be backed out of the gasoline and replaced with other components that may need to imported. However, the latter shouldn’t have much impact on imports, because butane and pentane are already captured in both the import number and in the product supplied number.

Bottom line? We should still expect to see imports backing out even as MTBE is replaced by ethanol. Further, the MTBE phase-out was completed in the first half of 2006, so there is no longer any complication from that. And 2007 and 2008 also show no compelling case that ethanol is backing out imports.

It still appears to me that ethanol has had no impact on oil imports. However, it is not yet clear to me why this would be the case, so I am digging to better understand. It may be that we are just trying to see a change that amounts to noise in the overall demand picture. In that case, the ethanol contribution is really put into perspective and readers may understand why I am focused on other solutions; solutions that I think can ultimately make a bigger impact.

It may be that something is still missing from the picture, which is one of the reasons I have contacted the EIA for some additional clarifications. I think the conclusion in any case is that ethanol backs out approximately zero imports, plus or minus some very small number.

So those like the RFA who make claims like this – FACT: The production and use of 9 billion gallons of ethanol in 2008 displaced the need for 321.4 million barrels of oil – are simply promoting misinformation.

75 thoughts on “Ethanol, Imports, and the MTBE Effect”