During my trip to India back in March, I got to experience a variety of transportation options. One of those was the auto rickshaw. I commented at the time that the efficiency of the thing had to be incredible (the previous link says 82 mpg), as it was essentially an enclosed motorcycle. That’s me sitting in one below: 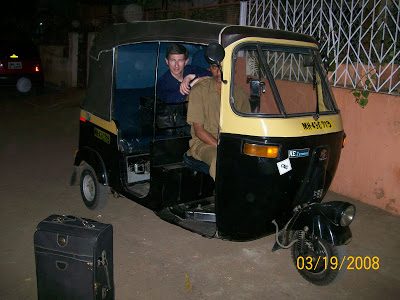 NEW DELHI (AFP) – It’s been touted as a solution to urban India’s traffic woes, chronic pollution and fossil fuel dependence, as well as an escape from backbreaking human toil.

A state-of-the-art, solar powered version of the humble cycle-rickshaw promises to deliver on all this and more.

The “soleckshaw,” unveiled this month in New Delhi, is a motorised cycle rickshaw that can be pedalled normally or run on a 36-volt solar battery.

Three obvious questions come to mind: How far can it travel on a charge, how many miles a day do these guys typically drive, and how long does it take to fully recharge? Or, if I want to combine them, “If I started the day fully recharged, what percentage of my day is spent pedaling?” But I only saw the answer to one of these questions:

The fully-charged solar battery will power the rickshaw for 50 to 70 kilometres (30 to 42 miles). Used batteries can be deposited at a centralised solar-powered charging station and replaced for a nominal fee.

I suppose if they are changing batteries out as needed, then it is merely a question of cost and frequency of changing the batteries.

This seems to be a very good transportation option for short trips in densely populated areas.