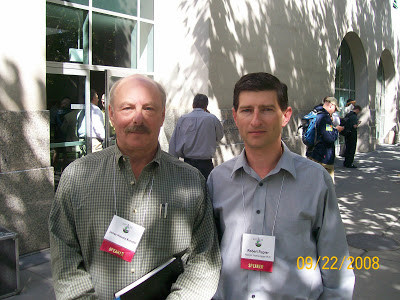 Live from the 2008 ASPO Conference, where I am still running on European time (waking up at 3 a.m. and dead tired by 8 p.m.). The talk of the conference so far is on the proposed $700 billion bailout of the financial services sector, and whether this may be just the tip of the iceberg. This is the same sort of bailout that I think is eventually destined to happen to some of the biofuels sectors that have had mandated expansions. When it becomes clear that they aren’t doing much about our dependence on foreign oil or fossil fuels, support will likely dwindle. But it would be devastating for the Midwest to just let these companies fail en masse, hence there will be a lot of pressure to bail them out.

Yesterday was a light day at the conference, with several sessions running in parallel. I gave a talk on the energy information agencies, which I will write up as an essay as soon as time allows. I have had a chance to meet a lot of people that up to now I only knew by name. I got to have lunch yesterday with Jim Kunstler, author of The Long Emergency,

and during the Q&A following my talk someone pointed out that Matt Simmons, author of Twilight in the Desert,

was standing at the back of the room. Both of those books really had an impact on me (for several reasons, and not because I accepted all of their conclusions) and it was a pleasure to see them in person.

In energy news, gas prices are beginning to ease off, but there are also a number of reports of gasoline shortages in the south. I expect this situation to improve – not get worse as I have heard a number of people suggest – in the coming week. However, if we have another hurricane in the gulf a week from now, I expect that we will see shortages that haven’t been seen since the early 70’s.

Comments from me will continue to be sporadic until late in the week. At that point, things should start to get back to normal. My talk on biofuels takes place tomorrow. I will try to cover the world of biofuels in 20 minutes. Here is the outline of the talk as I will present it:

Stacking up the contenders

Can the U.S. emulate Brazil?

• Anything Into Oil
• Algae to biodiesel
• Ethanol for $1/gal

As with the other talk, I will write this one up and present as an essay.

17 thoughts on “Live from ASPO”