I have been so preoccupied lately, that I have barely noticed that there is a potentially very dangerous hurricane moving into the Gulf of Mexico. Furthermore, Tropical Storm Hanna is not far behind. Here are a couple of graphics I picked up from The Oil Drum, which in my opinion always has consistently the best hurricane coverage – particularly as it relates to energy infrastructure: 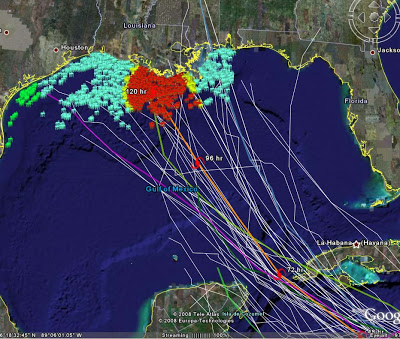 Not only is it forcing the evacuation of lots of oil infrastructure (as did Katrina in 2005), but it is also projected to strike landfall in the same general vicinity.

One interesting note is that the IEA announced that they were prepared to release oil stocks if necessary:

“It’s too early to think of any implications yet but we are closely following this with the U.S. government,” Aad van Bohemen, head of the emergency planning and the preparation division at the IEA, told Reuters.

The agency, which co-ordinates emergency measures in times of oil supply disruption, released oil products stocks in 2005 when hurricanes crippled U.S. oil operations in the area.

That struck me as a little peculiar, because the IEA is an organization that provides information. I was a little surprised to hear them talking of energy stocks. So I dug a little bit:

What is the level of IEA Member countries’ oil stocks?

• IEA Member countries are holding some 4.1 billion barrels of public and industry oilstocks, of which, roughly 1.4 billion barrels are government controlled for emergency purposes.

There is a lot of good information on that fact sheet, including the fact that they made 2 million barrels a day available in the wake of Hurricane Katrina.

I probably don’t have to tell people this as they learned a hard lesson following Katrina, but keep your gas tanks full – even if you are hundreds of miles from the Gulf Coast.