The numbers are out. Gasoline made a strong gain this week, as imports remained high. Demand remains well above last year’s numbers. Given that imports were down slightly over the previous week (but still near all-time high levels), and refinery utilization was down sharply, I am going to have to look at this a bit more to figure out why gasoline inventories made such a strong move up. At a cursory glance, they don’t seem to add up. I would also note that while overall inventories rose, inventories on the East Coast – already incredibly low as noted below – fell again this week.

The highlights (as I see them):

It seems like every week for the past month, there has been a disconnect immediately following the release of the weekly inventory numbers. Yes, gasoline inventories have risen for 4 weeks (and are predicted to again this week). Some will look at that, and think that we are digging ourselves out of this inventory hole. But then after digesting the numbers for a day or so (or even less, as was the case last week), the market reacts differently. The story must be more complex than it seems on a superficial level. And it is.

An OPIS report from June 4th pointed out that some regions are worse off than others:

New England and the Southeast, both regions that could suffer a direct hit in this year’s hurricane season, have some of the lowest inventories in the U.S. Just how thin is the supply cushion? About 11 gallons per person is all that is available, according to an analysis of inventory data by Oil Price Information Service.

Here are some excerpts from a story that came out after analysts had digested last week’s numbers for a couple of days:

“The market’s realizing that we’re just not seeing enough of a supply build,” said Jim Ritterbusch, president of Ritterbusch & Associates in Galena, Ill.

“The overall 1.3 million barrel build in gasoline inventories this week is pretty lackluster by seasonal standards and when one factors in that 800,000 barrels of the build happened on the West Coast, it looks very much below par,” wrote Barclays Capital analyst Kevin Norrish in a research note. “The East Coast is starting to look very tight indeed.”

Despite the increase in gasoline supplies, the Energy Department report showed that refinery utilization was flat last week, at 91.1 percent of production capacity, compared to the previous week.

“An apparent recovery in domestic gasoline output is illusory,” wrote Antoine Halff, an analyst at Fimat USA, in a research note. “Refinery crude runs actually fell on the week and a headline gain in gasoline yields is entirely attributable to a surge in imports, which soared to the third highest weekly average ever.”

If you look at the historical trend, what has happened is that in every year since 2001, the gasoline inventory gains of the spring flattened starting in June, and then decreased in July and August. The inventory draw was as much as 21 million barrels in 2005. And it is almost universally true that levels at the end of August are lower than levels in June, because July and August are when demand really starts to pick up. This is why many still feel like we have a potential problem. 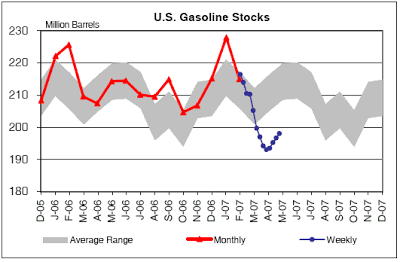 In Figure 1, you can see that while inventories have been on the rise, we are just about at the point that they historically flatten out. Then, toward the latter part of June to early July, they take a nose dive. From current inventory levels, that would drop us below the 190 million barrel mark, which could once again cause prices to spike again.

Yet, we may in fact skate by if there are no unforeseen problems. If we have no disruptions from hurricanes, imports stay strong, and we have no major refinery outages, we are likely to slowly climb out of this hole. But recent history suggests that we are likely to see more draws over the summer, exacerbating an already tight inventory picture.