There have been many claims in recent years that ethanol is going to help wean us off of fossil fuels. In fact, many of our political leaders claim that as long as we just keep subsidizing the ethanol industry, eventually cellulosic ethanol will take over and we will all motor happily along on E85. We are making energy policy decisions based on this assumption.

As this analysis will show, the data we have to date don’t support those kinds of projections. Let’s consider the effect to date of the explosive growth in grain ethanol production. The difficulty in producing ethanol from cellulose is probably an order of magnitude greater than it is for producing ethanol from corn. Therefore, it is highly unlikely that the growth curve for cellulosic ethanol production (presuming it is ever commercially viable) will rival that of grain ethanol. So, let’s take a look at how gasoline consumption has evolved as we ramped up billions of gallons of ethanol production.

As a result of the implementation of the Renewable Fuels Standard (RFS), increased octane demand and other market forces, the U.S. ethanol industry produced a record 4.9 billion gallons of ethanol from 110 biorefineries located in 19 states across the country in 2006. 2006 production exceeded the previous year’s production by a record one billion gallons, or more than 25%. Since 2000, ethanol production in the U.S. has increased more than 300%.

2006 was also a record year for construction, with no fewer than 15 new biorefineries coming online. The addition of these biorefineries, including the completion of expansion projects, added 1.051 billion gallons of new production capacity for the year. Additionally, 2006 closed with no fewer than 73 biorefineries under construction and 8 expanding that will add 6 billion gallons of new production capacity by 2009.

So, the next time someone tells you that ethanol production is going to reduce our fossil fuel usage, tell them that in the last 7 years annual ethanol production grew by 3 billion gallons, while annual gasoline demand grew by 14 billion gallons. This, despite steadily rising oil prices and record high gasoline prices. But, I would also point out that average annual rack ethanol prices have never – not once in 25 years – been lower than gasoline prices. And note this is a comparison versus 87 octane, which is always more expensive than the 85 octane that most people buy (85 octane has about an 80% market share). 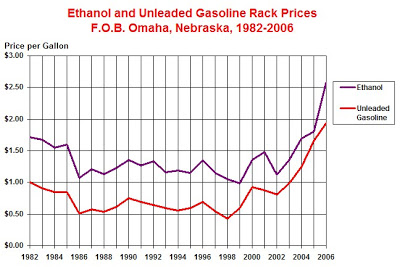 I Am Still Not Convinced

A skeptic, eh? Good for you. Make me prove my point beyond reasonable doubt. That’s fair. I am sure you would agree that if the claims of ethanol proponents are true – that in fact ethanol is displacing some portion of our gasoline usage – the displacement should show up if we plot gasoline demand growth. What I would expect to see is that as ethanol production ramped up exponentially from about 2000, the gasoline demand curve should drop down below the historical trend. This would be fairly compelling evidence that something – which could be ethanol – is causing people to reduce gasoline consumption. Is that what we see? (Note: Gasoline production has been corrected for the contained ethanol in reformulated gasoline and E85. Thanks to various readers for bringing that up). 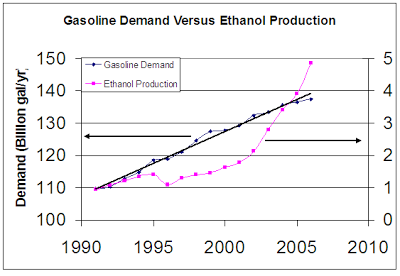 In 2005, Hurricane Katrina hit, followed by a fast run-up in gasoline prices. At the time, there were wide spread media reports of high prices lowering demand for gasoline. 2006 also saw gasoline prices hitting the $3 mark. Given that ethanol ramped up by 2 billion gallons from 1999 to 2004 with no apparent effect on the gasoline demand curve, it is unlikely that the 1.5 billion gallon increase in 2005 and 2006 is responsible for the small degree of variance.

So there you have it: Billions paid out in subsidies, food prices going up, farmland being used up at a faster pace, increased pollution from herbicide and pesticide runoff – and no apparent impact at all on our gasoline consumption. This is shaping up to be the largest boondoggle in U.S. history. But this analysis is exactly the reason I discount the recent reports that refiners might not expand because of the growth in mandated ethanol. I think this is merely a political shot at those who are demanding that the oil industry should spend billions to expand while also demanding that we reduce our gasoline consumption by 20%.

26 thoughts on “The Mythical Ethanol Threat”