The following is a slightly modified version of an essay that I posted to The Oil Drum .

I have stated on several occasions that I believe global warming is a greater immediate threat than Peak Oil. As long as the demand is there, energy companies will strive to supply fuel to the marketplace. To meet the demand, we will develop tar sands, while consuming enormous quantities of natural gas. We will turn natural gas (or even coal) indirectly (and inefficiently) into ethanol. Finally, we will turn vast quantities of carbon into fuel via what I term “XTL” technologies. XTL technologies consist of a partial oxidation (POX) reaction followed by the Fischer-Tropsch (FT) reaction. When the POX feedstock is natural gas, this is referred to as a gas-to-liquids (GTL) process. If the feedstock is coal or biomass, this is referred to as CTL, or BTL respectively.

I won’t go into a detailed explanation of the POX and FT reactions. What I will give is a quick, layman’s overview. When a hydrocarbon material is burned (e.g. natural gas, coal, biomass, etc.), it can be completely oxidized (combusted) to carbon dioxide and water, or it can be partially oxidized to carbon monoxide and hydrogen. The latter POX reaction is accomplished by restricting the amount of oxygen during the combustion, and it is a potentially deadly reaction should it inadvertently occur inside your home. The resulting mixture of carbon monoxide and hydrogen is called synthesis gas (syngas) and can be used in the manufacture of an abundance of organic compounds.

At present, the economics for GTL are far more favorable than for CTL or BTL. There are enormous reserves of natural gas throughout the world. Worldwide reserves of natural gas are estimated to be 6,200 trillion cubic feet, of which 3,000 trillion cubic feet are estimated to be stranded. (Reserves are considered to be stranded if it is uneconomical or impractical to get them to market.) This is enough stranded natural gas to produce 300 billion barrels of fuel, according to Syntroleum (Warning: It’s a 3.4 meg PDF).

GTL is not a pipe dream. The process is technically viable, having been demonstrated on numerous occasions. It is economically viable depending on the price spread between natural gas and oil. Despite the fact that the capital costs for GTL plants are approximately twice those of conventional oil refineries, a number of projects have been announced in Qatar. Plants are being built, and the fuel produced will help supply some of the shortfall that Peak Oil will generate.

Of course there is a catch. GTL is not all that efficient. There are efficiency losses during both the POX and the FT processes. It would be far more efficient to run automobiles directly on the natural gas. Due to the fact that the gas is stranded, this is obviously not an option. But the efficiency losses are significant. According to the Syntroleum link, it takes 10,000 cubic feet of gas to make 1 barrel of fuel. 10,000 cubic feet of natural gas contain roughly 10 million BTUs, but a barrel of fuel contains only around 5.5-6 million BTUs. Forty percent of the BTUs are either lost as radiant heat, or turned to steam and consumed in the GTL plant. Unless carbon sequestration is in place (unlikely), all of those BTUs ended up as carbon dioxide in the atmosphere. On top of that, the BTUs from the barrel of fuel are going to end up as carbon dioxide in the atmosphere once the fuel is burned in an engine.

The reason I find this more worrisome than Peak Oil is that I believe this path is inevitable, yet the consequences are unpredictable. We will make and use GTL fuel, as inefficient as it may be. Our carbon dioxide emissions are likely to accelerate in our quest to maintain affordable energy. As stranded gas supplies are consumed and GTL production peaks, there is CTL, with the same efficiency problems, waiting in the wings. From my view, the fossil fuel economy will be with us for a long time to come.

Look at the figure below, and think of the experiment we are conducting. Atmospheric carbon dioxide levels are at their highest levels in human history. The trend in the graph shows a linear increase in atmospheric levels. The trend didn’t deviate at all during the oil shocks of the 70’s. 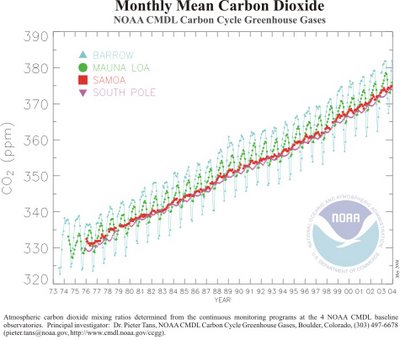 I believe I can see the foresee the consequences of Peak Oil. It certainly won’t be a picnic. But I think I can plan for it, and I believe that we will eventually adjust to a post-oil world. But I can’t foresee the consequences of warming the earth up by 5 or 10 degrees C. Humanity has never had to deal with this problem. The Sahara Desert was once lush with vegetation and teemed with wildlife. Consider the impact if this is the fate of the Corn Belt of the Midwest. Yet I see nothing to indicate that we are going to veer from the course we have set.

9 thoughts on “XTL: Promise and Peril”